Pis Yedili (Dirty Seven) is a shedding-type card game for two or more players, in which the object is to get rid of the cards in your hand onto a discard pile by matching the number or suit of the previous discard.

Pis Yedili ("Dirty Seven") is the Turkish version of Crazy Eights. There are many variations of the basic game, and a number of different names including Craits, Last One, Mau Mau, Pesten, Rockaway, Swedish Rummy, Switch, Last Card, Screw Your Neighbour, and Tschausepp. Bartok, Mao, Quango, Zar, Taki and Uno are more extreme variations.

Seven cards are dealt to each player. The remaining cards of the deck are placed face down at the center of the table. The player left of the dealer starts with discarding a club. If the player does not gave a club, he or she draws cards from the stockpile until getting a club. (Penalty/Special cards effects can not be used at this point)

Starting with the player to dealer's left, and continuing clockwise, each player in turn must either play a legal card face up on top of the discard pile, or draw a card from the undealt stock. The following plays are legal:

As an example: Once the six of clubs is played, the next player:

If a player is unable to match the rank or suit of the top card of the discard pile and does not have a Jack, he or she draws cards from the stockpile until getting a playable card or pass to the next player after draw at least one card.

Jack (J) : Change Suit
A Jack can be played at any time and the player can nominate any suit. If a Jack (J) is on top of the pile, you can not play a Jack.

8 : Skip
When an 8 is played, the next player in rotation misses a turn, and the turn passes to the following player.

10 : Reverse direction
When a 10 is played, the direction of play reverses, becoming anticlockwise if it had been clockwise, or vice versa.

Ace (A) : Play another card
When an Ace (A) is played, the player can play another card which matches the rank or suit of the Ace (A) played previously.

The first player who gets rid of all their cards wins, and the other players score penalty points according to the cards they have left in their hands:

Also if the players run out of cards in the deck, the player with the lowest point score in their hand wins.

After 4 consecutive games (deals) the player with the lowest point score wins.

If you choose MEmu, Nox Player, or Bluestacks for installing Pis Yedili - Dirty Seven apps on your PC, you will easily install it. Those are the best android emulators among the others. Let’s find out the installation process. 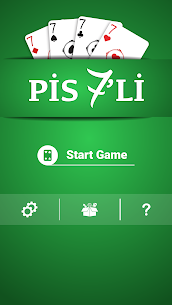 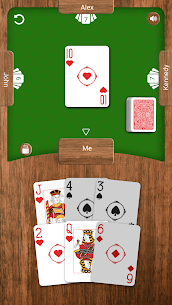